Take an easy hike along Kortum Trail on the bluff above the blue Pacific and you’ll be on the path of ancient herds that once lived here.  You’ll pass several giant stone sentinels rising from the plain. These monoliths were carved by the ocean surf when sea levels were higher. They’re actually ancient sea stacks, just like the ones standing out in the surf today. Tens of thousands of years ago, during the last Ice Age, the plain you’re standing on was once beneath the Pacific Ocean. After ocean levels fell, this became rich prairie, covered far and wide with herds of animals, many of them now extinct.

As you pass the giant rocks, look on the east side (away from the ocean) for large, incredibly smooth patches along the rough vertical sides, down low and up high. 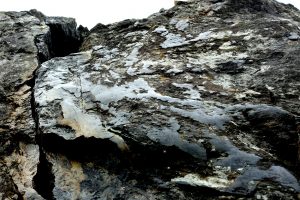 Those patches are believed to have been worn smooth by generations of passing ancient mammoths rubbing their backs and sides against them – a grooming behavior still seen in African elephants today.