In 1849, strapping young dark haired twenty year old Tom Maddock married his sweetheart Alice in the village church in Wexford County, Ireland, and the next day they boarded a ship for the long sail to America.

Their plan was to make a new life in California. They made their way to friends in Marin County. Tom had heard the railroads, expanding fast, were hiring teamsters to drive supply wagons, and paid well.  But the jobs were gone by the time he’d arrived, so he took work as a milker on a dairy farm.  By 1876 the couple had three children, and Tom, chafing to be independent and looking for a start, moved the family to the wild Santa Cruz mountains, to a place called Lorenzo, today’s Boulder Creek.  A friend he met there told him of a once in a lifetime opportunity: railroad companies were releasing parts of their vast tracts of redwood forest, and land could be claimed by individuals willing to live on it for a period of five years.

15 miles above Lorenzo, on the east bank of Opal Creek, Tom picked his spot and built a small squatter’s cabin, one room with an open front facing south, with a lean-to for a summer kitchen, and moved in with the family.  Six foot tall and 240 pounds, Tom made money harvesting and hauling tan oak bark out of the mountains for the leather tanneries. The family harvested the local huckleberries, fis 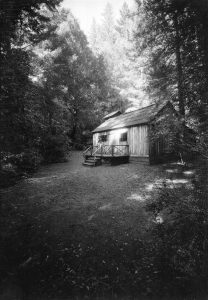 hed the stream and hunted, grew a small garden and raised an orchard. Over time, he added a small shelter for sleeping, and a shed for his mules.

The five years passed, and in 1882 Tom paid $7.50 for his 100 forest acres. With his 11 year old son, he felled a giant redwood and from the tree built a one room cabin, which housed the family for years.  In all Alice and Tom bore and raised ten children.